For the first time and in order to guarantee the highest level of competition, the organization of La Grande Odyssée Savoie Mont Blanc has selected “10 elite mushers” before registration. They have been chosen thanks to their official results of the past seasons.

On Thursday September 9th, at the usual opening date for registrations, the 66 race numbers of La Grande Odyssée Savoie Mont Blanc and of the different Trophies have been reserved in less than 2 hours. A waiting list has been opened.

From the 8th to the 19th of January 2022, 66 mushers from 8 nations and their 600 high level athlete dogs will take the start of La Grande Odyssée Savoie Mont Blanc and the three Trophies:

An 18th edition that promises to be festive and popular, after a 2021 edition marked by a complicated health context and a race behind closed doors.

It is with great enthusiasm that the organizing team unveils the official list of mushers who will participate in La Grande Odyssée Savoie Mont Blanc in the Open and Limited categories: 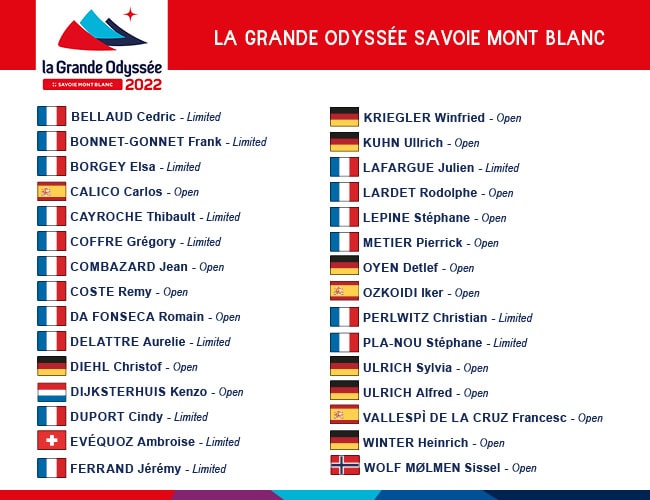 All the great mushers who have marked the race these last three years will be present and the competition looks like being very strong.

In the Open category (pool of 12 dogs), we will find the French Rémy Coste, who will try to get a 6th title. His most formidable rival will undoubtedly be the Spanish Iker Ozkoïdi Garcia, twice second. The Norwegian Sissel Wolf Molmen comes back after her third place in 2019 to aim again for the podium or even better. We will also have to count on the German armada (seven mushers) led by Heinrich Winter, Sylvia Ulrich and Detlef Oyen. With such a strong field, the teams will probably have to fight until the last stage to get the victory and the places on the podium.

In the Limited category (pool of 8 to 9 dogs), the French double champion Cindy Duport will again find on her way the French Christian Perlwitz, her runner-up of the last two editions, but it is another French musher who could prevent her from achieving the pass of three. Indeed, Aurélie Delattre, who had taken the third place of the 2020 edition in the open category, will compete this year in the Limited category. This promises to be a very high level race between the two riders.

The official lists of the 18th edition :

The organization team looks forward to seeing you from January 8th to 19th 2022 for the 18th edition of La Grande Odyssée Savoie Mont Blanc !