As the leading operator of associations, VVF’s mission is to offer quality vacations to as many people as possible while contributing to the economic and social development of the regions. Sensitive to the preservation of the environment and committed to the planning and development of territories, it is only natural that VVF should become a title partner of La Grande Odyssée. 🤝

« With this new title partnership, we wish to participate in the promotion of the territories crossed by the race and to allow the greatest number of people to discover them, through soft and more respectful practices of the environment, in a logic of development to the sustainable tourism and accessible to any public. “The link Man-Animal-Nature, intimately linked in this magnificent adventure, has the virtue of touching young audiences, and to allow to sensitize them to the preservation of nature ». Explains Stéphane le Bihan, General Manager of VVF. 🏔️

On the side of the organizer, Annabel Kam, president of KCIOP (the organizing company), says that she is « particularly happy to be able to associate La Grande Odyssée with a very strong brand among families ». She specifies that « this new partnership will allow us to reach out more to certain audiences, such as juniors and seniors, while preserving the event’s popular and general public DNA as well as its territorial roots ». She concludes : « with VVF we will also be able to work on an increased experiential approach for all audiences » 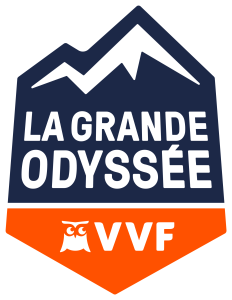 ➡️ The new logo has a closed shape with a perspective to give it dynamism and to present the name “La Grande Odyssée” in the manner of an adventure film title.

➡️ At the top, the cut-out of a stylized mountain shows the natural playground of the race in the massifs of the Auvergne-Rhône-Alpes region. The navy blue color contrasts elegantly with the white of the snow and recalls the specificity of the stages which take place during the day and at night. The lower part, separated by the white net, allows to value the new title partner, VVF, whose main orange color tints the new identity with a touch of sportiness and freshness.

➡️ This hyphenation allows the logo to be used easily on all communication media, playing with finesse between the graphic system and the complementary cyan blue color of the new major partner: The Auvergne-Rhône-Alpes Region.